My Change Story Starts Early
(Yours, too?) 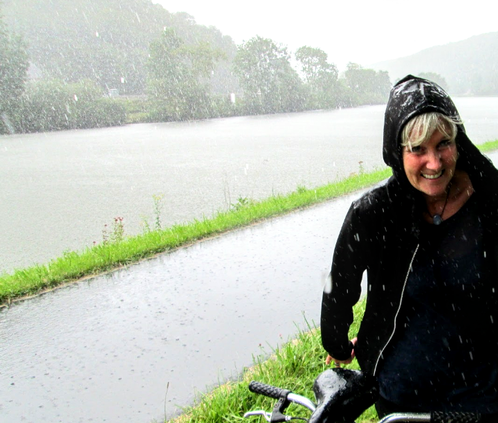 It's not all sunshine and roses!

​
Truth: I faced a lot of change as a child.
It wasn't happy change.
I felt so unlucky
that at 21, I legally changed
my last name to Talisman.
For luck.

And my life shifted dramatically!
It wasn't the changed name.
It was the changed mindset.

Now, as a change strategist,
​I walk my talk.
I know what it´s like to
change careers, languages, and cultures.

But I also know
the value of small changes
that make a big difference
in your happiness and your success.

I was born to a young single woman
who'd had an affair with a married man.
When I was two days old,
I was adopted by a couple who
had been on an adoption wait list for years.
When they got the call that a baby girl was available,
they (bravely) agreed to adopt me,
even though they were (finally!) expecting
their first child, a boy, within a month.
Three years later, they had another baby boy.

But when I was four, my father told my mother
that he was "homosexual" (this was 1964).
After looking it up in the dictionary(!),
she promptly filed for divorce,
packed the three kids in the backseat,
and drove from California to Portland, Oregon
to live with her parents.

The divorce was messy.
Unlisted phone numbers.
Court battles.
Even an attempted kidnapping.

That same year, my beloved grandfather
had a heart attack while mowing the lawn.
He died the next day.
The shock and grief sent my grandmother into early dementia,
which was problematic since she was our caregiver
while Mom worked to support us.
In her confusion, my grandmother believed I was
an evil interloper wreaking havoc on her family.
She tried to kill me. Twice.

When I was ten,
my mother remarried. My new stepfather
was divorced with four other kids to support.
There was a lot of stress and frustration.
There was abuse.
(This story gets happier, I promise!)

I tell you all this because,
like many people (you?),
​I grew up in a family
that viewed change as the enemy.
Change meant upheaval, uncertainty.
It was scary, unforgiving, and always bad.
That´s the way it was for my parents.
And that fear of change
got passed right on down to me.

Back to the family.
We all worked hard to build a garage where we could live
on the 10 acres of rural woods my stepfather bought.
It was three miles down a gravel road
from a farming town of 365 people. 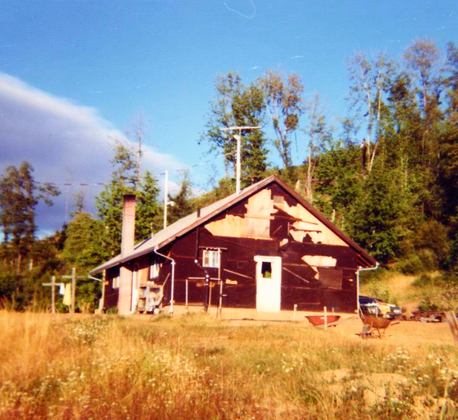 I lived here for five years (age 10-15) with my mom, stepdad, two brothers,
and two or three stepsiblings on weekends.
When I was 17,
I met my birth mother,
who had eventually married
but never had other children.
I also met my grandparents, aunts, and cousins.
It was amazing to meet these new family members
who looked like me, and with whom
I had so much in common.
(At 20, I met my birth father, his wife [the same one!]
and my half-brother.)

I saved my money from working in fields and fabric stores.
Leveraging my titles as homecoming queen and valedictorian,
(disclosure: there were 36 students in my class)
I seized scholarships (and loans) at a private university
in Washington State.

Off I went...and failed.
I nearly flunked out my first semester.
I got stress-sick and went home before my first finals.
I had gained 20 pounds.
I got the worst grades of my life.
I fell into a depression.
I was completely lost.

See, I had never learned the skills
to change successfully,
to make smart decisions outside of my little world.

So, I set about learning.

I switched(!) my major from
pre-med to psychology and Asian Studies.
I started to breathe.
Learning about Asia got me excited to actually go there.
I worked hard, saved money,
and loaded up on classes.

I spent my senior year
studying art and architecture in Japan,
traveling through China by train,
meditating with Buddhist monks in Sri Lanka,
exploring Hindu temples in India,
bird watching in the Himalayas of Nepal,
and finishing with my graduation ceremony
in Sigmund Freud´s house in Vienna, Austria. 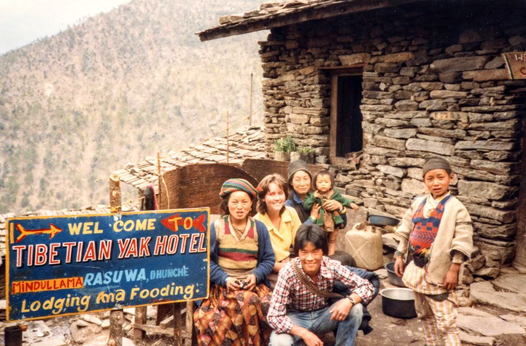 Living in a garage was excellent preparation for staying with this family in Nepal.
I made so many mistakes.
I fumbled hilariously.
But by learning how to
face big gnarly change on a daily basis,
I started to figure things out.

And then...I graduated into a recession.
(You, too?)
I spent months stuck at home,
typing up endless cover letters
and sending out resumes daily.
I got no calls. No letters. No interviews.
*crickets*

The next (76th!) job I applied for was
an English teaching position in rural Japan.
Thankfully, I nailed the interview,
and accepted the job.
Despite my student loans.
(Had to figure out how to pay those.)
Despite my parents´ insistence
that it was time for me to settle down.
(Subtext: Stop changing.)

In Japan, I met the love of my life.
He grew up just ten miles away
from my little town in Oregon.
We´ve been happily married for 35+ years.
(There are some things I don´t want to change!)
We had our first two children in Japan.

Truth: I had never changed a diaper until my first baby was born.
I was learning that big leaps worked well for me.
So, I took more of them.

We returned to Oregon.
I taught English at a private university.
We had two more children.
​Life was fun and full. 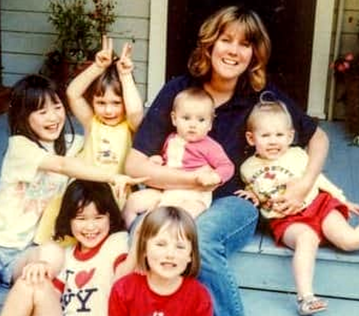 Four daughters within 5 years! (and two beloved nieces who lived down the block.)
I started a vintage/resale clothing store.
We built a community skateboard park.

But within a few years, I lost three brothers.
My beloved half-brother died of AIDS.
Two others took their own lives.
I came close to taking my own.

What saved me? Mindfulness.
I turned to the meditation and mindfulness practices
I had been lucky(!) to learn
when I was in Asia.

I crafted my own version.
I made mine simple and secular.
And I had a crazy idea to
make mindfulness mainstream
by turning it into something playful.
I created a mindfulness training company.
It became a fun movement.

Life was good.
But, our daughters were getting older.
I wanted our family to have a chance to
live abroad together
before they all scattered.

So, in 2005, we sold everything and moved to Mexico.
My husband and I did not speak any Spanish.
We had four teenagers at the time.
Everyone told us it was a huge mistake,
that we were derailing our daughters´ educations
and ruining their futures.
(Update: our oldest has a doctorate, the second
has a master´s, and the younger two have bachelor´s
degrees. All are thriving.)

Our gaggle of girls in Mexico.
We had a crazy eventful year in Mexico,
and then moved to Argentina.
(We let our youngest daughter pick the country.)

Did I mention that my husband and I
were doing all this while
making less than $50,000 a year combined?
#frugalitywins

While living in Buenos Aires,
I pitched an out-there idea for a book
about how we had to shepherd our daughters
through high school and into college in non-traditional ways.
I had zero contacts in the publishing world.
I didn't even know any published authors.
I got an agent in New York and a
book deal with a division of Random House.

The girls all left for college,
and we were empty nesters.
We bought a farmhouse in Uruguay on five acres
that I saw online for $36,000,
and spent a year refurbishing it
while I wrote a novel. ​​​
That year was hilarious.
(Alas, the novel was not.) 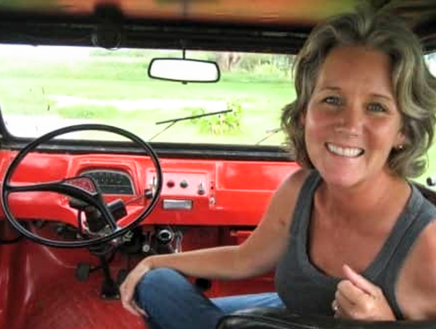 In our "car" on our farm in Uruguay.
But we missed being around kids.
So, we decided to return to Asia
to teach English together again.

We went back to Japan.
But the school was a bad fit.
I got fired for allowing my
3 year olds to play and do art.
(Timing: the earthquake/tsunami/meltdown
hit a few days after we left Japan.)

With no idea what to do next,
we hunkered down in (cheap) Thailand
while searching online for jobs.
We got hired to teach at the
new flagship headquarters of a
private English kindergarten chain
in Beijing.

We loved being surrounded by children!
Excited by the latest neurological studies
in infant language acquisition,
I started a program for infants called Lucky Baby.
(Obvious ploy to play with babies.) 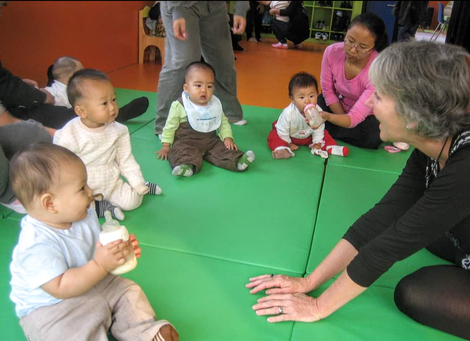 I mean, is this even work?
​I was quickly promoted to vice-principal,
and then got headhunted to become
the governess for the
family of Jack Ma,
the visionary philanthropist and founder of Alibaba Group.
Best. Gig. Ever.
After four years in China, we longed for
bright colors and blue skies.
We moved to Mexico and
spent a year happily making art. 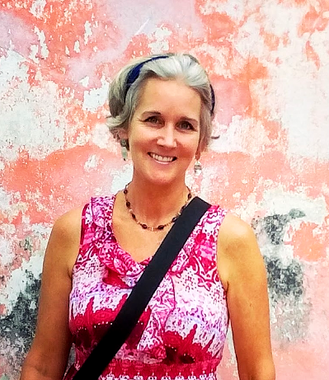 Artsy days in Mexico.
While in Mexico, I was bitten by a mosquito,
and got chikungunya, an excruciating illness that, in some cases (mine),
leads to an autoimmune disease characterized by
relentless pain, joint deformity, organ failure, and early death.
There is no cure, and no consistently effective treatment.
So, I researched the heck out of it,
and adapted a nutritional approach to manage it.

For two years, we continued traveling slowly,
living a very minimalist lifestyle.
(One carry-on each. Period.)
I rested. I ate lots of good food. I healed,
becoming symptom-free and healthier than ever.

Fast-forward to 2019.
My husband and I built a glass straw company with a friend
based in Portland, Oregon.
Fall: we went to Argentina for the birth of our first grandchild.
In July 2020, still in Buenos Aires due to the travel ban,
we sold the business to one of our Oregon customers.

In August, as a new grandmother at 60
and now free to focus on my true calling,
I created Switch Strategies as the umbrella
​for my continuing work
as a teacher, mentor, and strategist.

For over 20 years, people have turned to me for advice
about how to make changes.
At first, I helped friends
and their friends.
Then, I worked with my mindfulness clients
who were seeking better balance in their lives.
Before and after my book was published,
I consulted with families,
study abroad programs,
and global educators looking for a
fresh perspective on learning in
adventurous and affordable ways.
And I have helped others dealing with autoimmune issues
learn to adapt to a new way of life in order to heal.

Now, maybe you're not into mindfulness,
don't want to study or move abroad,
and have no health problems whatsoever.
But everything that has helped me
and helped me help others
make big & small changes
can be useful to you, too.

It all comes down to being
1) open to change
2) skilled at creating a strategy
to make the most of it.

Bottom line:
​I know that wildly wonderful things can happen
​when we open our minds
and learn how to switch.

Ready to get started?