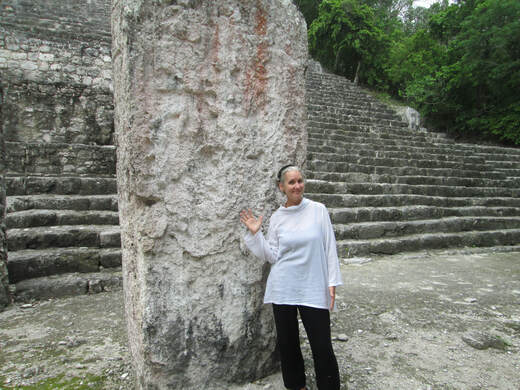 Exploring the ancient ruins of Calakmul in Mexico just days before the mosquito bite that would change everything.

Have you been diagnosed with a painful and debilitating
autoimmune disorder? (Me, too.)

I was healthy.
I hiked, meditated, stretched, managed my weight, and ate a mostly vegetarian diet focused on vegetables.
Then, during a chikungunya epidemic in Mexico that sickened thousands,
I was bitten by a mosquito carrying the illness.
While most suffer from a high fever, delirium, and painful joints (the name chikungunya is
from an African word meaning "walks bent over"), I had mild symptoms.
My youngest daughter had it, too.
At first, we blamed it on elevation (we were at 7,000 feet when we felt our first symptoms).
Then, she went in for a blood test, and was diagnosed.
But by then, I was over it (or so I thought).

Almost exactly a year later, I had such searing pain in my feet that I couldn't walk.
My hands felt like they were exploding from the inside out.
I went to the emergency room, and was diagnosed with rheumatoid arthritis.
I knew people who had suffered terribly from that, getting multiple joint replacement surgeries,
and dying young of cancer, heart disease, or liver failure.
I was devastated.

But I started doing research, and found just a couple of studies that had
found a post-chikungunya condition called chronic rheumatoid arthritis syndrome.
It occurred in women over 50 with a family history of autoimmune disease (my mother has MS.)

Ah HA!
It started with that mosquito bite! (My doctor was completely unaware of this link.)
Prognosis: a lifetime of chemo drugs and painkillers, and no guarantee that either will work.

I refused to accept this.
I had four daughters. I wanted to be a grandmother.
There were so many things I wanted to do! I was 55 years old.

So, I kept digging. I spent hours online.
And I discovered a nutrition-based autoimmune disease protocol
(several of them, in fact) that people were following to
reduce their symptoms and in many cases, overcome their disease.

I learned everything I could.
And I discovered that a dear friend had turned her RA diagnosis around using this same protocol!
Her advice: keep at it. Don't give up. It takes time, but it works.

I ate all the right foods and food combinations. I did all the natural treatments.
I kept at it.
I was in such terrible pain that, at times, I wanted to end my life.
But I kept on.

There were no high-five moments, no clear indication that it was over.
Basically, it was two frustrating years of waves of pain that disappeared and came rushing back.
But here I am, five years later, completely symptom-free, testing negative,
and healthier than I've ever been in my life.

Now, obviously, no two people are the same,
and no two diagnoses or health journeys are the same.
And in no way am I offering any sort of medical advice.
But I am here to tell you that if you have just been diagnosed
with an autoimmune disorder, and you're struggling to cope,
I can help support you in your
journey to better health.